With the Canadian and American sides of the border offering different attractions around Niagara Falls, of course, we naturally asked can you walk across the border at Niagara Falls? We are sharing this Niagara Falls border crossing guide so that you experience the best of this wonder of the world.

Straddled across the border of the USA and Canada, Niagara Falls is a natural wonder of the world.

On our first visit, we stayed on the US side and crossed the border to visit the Skylon Tower on the Canadian side.

For our second visit we crossed Rainbow Bridge, suitcases and all, and stayed on the Canadian side.

It is worth visiting both sides of the Falls to experience the great attractions in the area, so here is how to cross the border at Niagara Falls for those who aren’t too sure.

Can you walk over the Rainbow Bridge?

Rainbow bridge is the route you will take when crossing the border and you can either drive or walk across the bridge.

Crossing as a pedestrian or bicyclist from NY to Canada is free and the reverse route costs $1 but make sure you have cash; there is a machine to get the change from if needed. Walking across the bridge gives you an advantage of great views of the falls but also great photo opportunities on the border.

Both sides are very walkable areas that are well signposted, so if you are staying near the bridge, you can easily walk and find the bridge entrance. If not, use the map below or ask a taxi to take you to Rainbow Bridge.

Can you drive over the Rainbow Bridge?

You can drive over Rainbow Bridge – either via taxi or self-drive, though be aware that there can be traffic on the bridge with some wait time, causing a higher taxi price.

Traffic can be busy early in the morning and between 4-7pm so if you are planning on just a day trip on the other side, the walk may be a better option.

Do you need a passport for Niagara Falls?

Yes, you are leaving one country and entering another so you will need a passport.

For many passport holders, you will not need a visa for either Canada or America but double check the visa requirements for both if you are unsure.

Where to stay in Niagara Falls?

Getting to Niagara Falls

Fly – You can fly from Toronto (Pearson International) or Buffalo, New York airport with taxis, shuttle buses and train services available from both airports, making the trip to the falls quick and easy. Flights from NYC take approx. 45 minutes and starting prices begin around $60.

For both visits, we have flown into Buffalo Airport, the first time taking the Express Bus 210 that operates between May – September. These only run 7 times a day and we were lucky to catch one just after exiting the airport. You can also catch the 204 bus to Buffalo Downtown then change to bus 40, schedules found here. There is also plenty of attractions and restaurants to spend at least 48 hours in Buffalo City if you want to explore more than just the falls.

A friend of ours who recently travelled to Niagara Falls mentioned hotel shuttle buses to the left of the airport as you exit, which took her to the hotels near Rainbow Bridge. On our second trip, we went for a taxi as we had big suitcases and were very tired from an early flight. This second trip meant we had to take a taxi to Rainbow Bridge, costing us $70. From here, we walked across the bridge and then took the short 8-minute walk to our hotel; Days Inn near the falls.

Bus – Greyhound offers bus services to Niagara Falls but these can be long; taking 9-11 hours depending on traffic. This route costs approx. $55 each way to the Trailways bus terminal (NY) being located 6 miles from Rainbow Bridge.

Train – The Niagara Falls NY Amtrak Train Station is approx. 4.5km from rainbow bridge, costing around $10 cab fare whilst the Niagara falls station on the Canadian side has stopped trains through to Toronto apart from occasional weekend trips. Trains from New York City takes nine hours and cost $78 each way.

Drive – Niagara Falls is apron 6.5 hours drive from New York City with the quickest route taking the interstate 80 west to 81 North to 90 west then 190 North to the Robert Moses Parkway.

You can travel to and from various cities along the East Coast, travelling from Boston to Niagara Falls or Buffalo to NYC are popular routes, especially for those who have a little more time to explore the US. 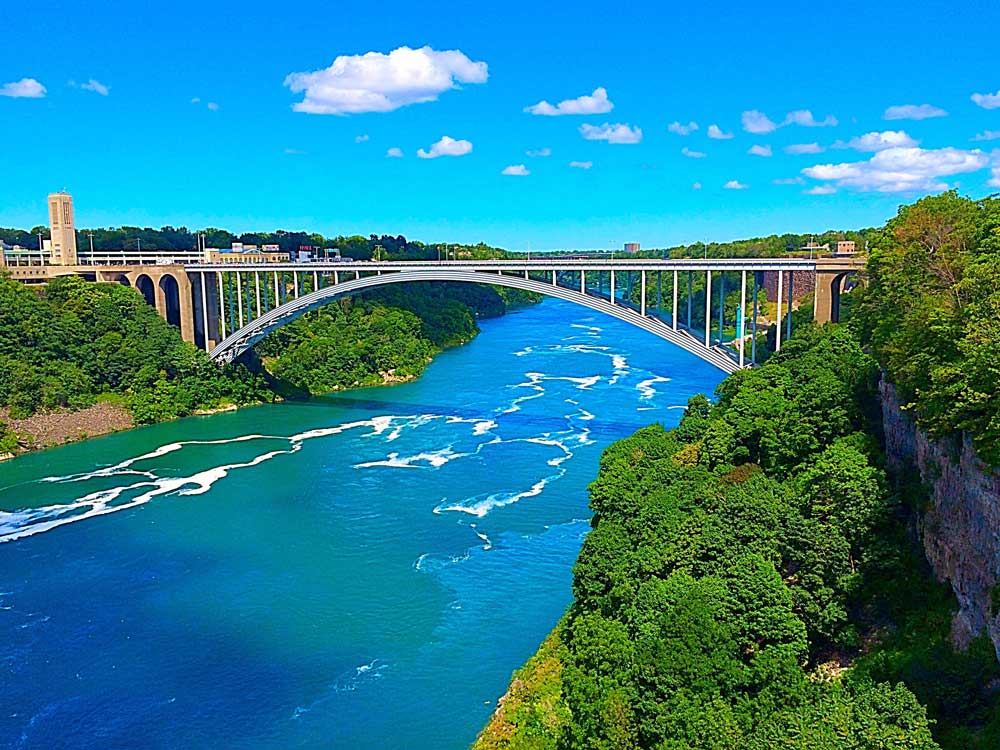 What is the Niagara Falls Rainbow Bridge walk?

The Rainbow Bridge walk is the route you will take from the USA side to the Canadian Side or vice versa. This is the closest border crossing to the Niagara Falls attraction.

Do you need a passport for Niagara Falls New York?

Do you need a passport to visit Niagara Falls Canada?

Do I need a visa to go to Niagara Falls?

Many international travellers are exempt from needing a visa to Niagara Falls under the Canada visa waiver. See full list of countries included in the waiver and more visa information here.

Do you need a passport to go to Niagara Falls?

If you are only visiting the attractions on the side that you are staying on, you do not need a passport. We don’t recommend taking one either, as many Niagara Falls activities will leave you soaked through and you don’t want to damage your passport. However, it you want to experience an attraction on the other side of the border, you will need a passport but remember to bring a waterproof case or bag like this.

Is Niagara Falls in USA or Canada?

Niagara Falls is a group of three waterfalls that span the border of Canada and the US. The American Falls and the Bridal Veil Falls is in the USA and the Canadian Horseshoe falls is in Canada.

Niagara Falls Canadian side vs American side - which is better?

The Canadian side offers the best panoramic views, particularly of the impressive Horseshoe Falls. Both sides offer boats under the falls too. The US side is surrounded by a State Park, ideal for those looking for a peaceful, relaxing experience. The Canadian side is catered to tourists, with plenty of restaurants, bars, interactive museums, casinos and attractions. If you are planning to stay in the area for a few days, there are more activities to enjoy on the Canadian side.

What is the nearest Canadian city to Niagara Falls?

The nearest Canadian city to Niagara Falls is Toronto. You can fly into this city and travel via bus, car or train to Niagara Falls. The Drive takes around 1.5 hours whilst the train is just under 2 hours.

Can you see Niagara Falls from the US side?

Can you walk over Rainbow Bridge Niagara Falls?

You can walk over Rainbow Bridge Niagara Falls. The bridge offers gorgeous views and can be used as an entrance point to/from Canada/USA.

How long does it take to walk across Rainbow Bridge Niagara Falls?

It takes around 5 minutes to walk across Rainbow Bridge. It can take up to an hour at the border if you are visiting on a national holiday.

How far is Rainbow Bridge from Niagara Falls?

Is the US Canada Border open 24 hours?

Yes, the US Canada Border on Rainbow Bridge is open 24 hours a day, 7 days a week. Expect to cross with 5-10 minutes with longer wait times during national holidays.

Is it safe to walk around Niagara Falls at night?

The falls turn the lights off at midnight but it is common to see tourists wandering around after that. It is safe to walk around Niagara Falls at night as long as you stay in well-lit areas.

How many days do you need in Niagara Falls?

If you want to experience the attractions on both sides (which we recommend), you will need at least two days in Niagara Falls.

Planning a trip to Niagara Falls? Let us help you plan your trip: 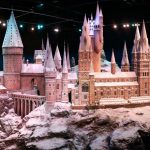 THE MAKING OF HARRY POTTER AT THE WARNER BROTHERS STUDIO TOUR, LONDON (VIDEO) 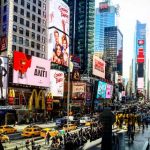 HOW TO PLAN A TRIP TO CANADA

Tips for planning a trip to Florida