It was our first day in Orlando and naturally I made damn sure we would be heading to Universal Studios and Island of Adventures! Even since I was 11, I had my sights set on Hogwarts and am still waiting for my letter!

Our resort offered shuttles to and from the theme park, so we jumped on the 9.30am bus to Universal, loaded with suntan lotion and water! 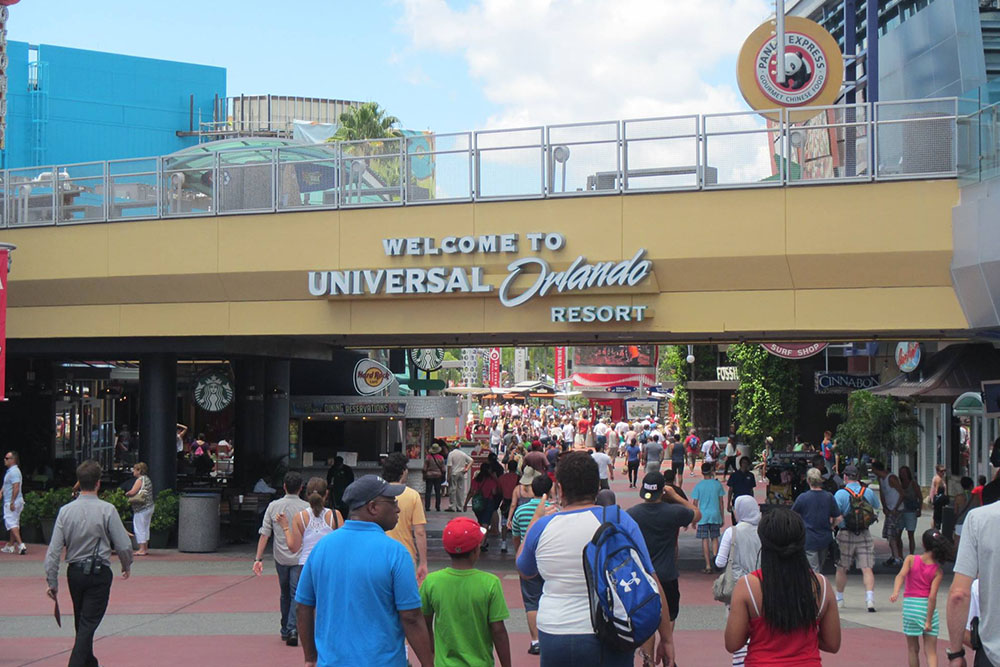 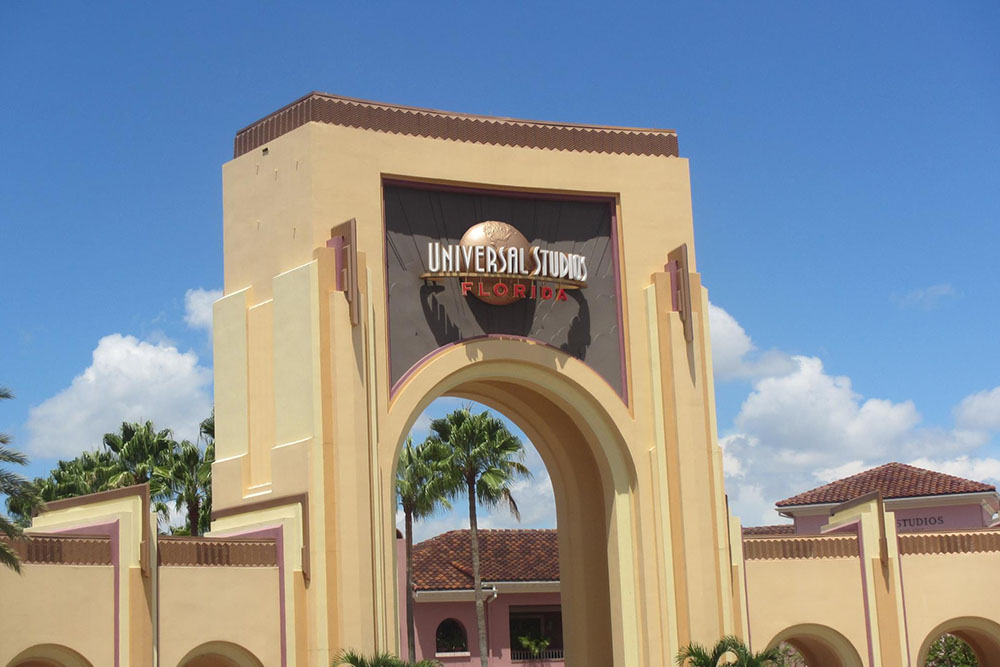 Once we arrived at Universal Studios, we followed the advise of many others and headed straight to the back of the park (POTTER LAND) and worked our way forwards. I am not sure how helpful this tip actually is considering we arrived at like 10am so the park had already been open an hour (and two hours for those with extended passes).

We had used a Universal Studios Touring Plan to prepare for this busy day visiting the park whilst seeing all the areas we wanted to.

Either way, Diagon Alley wasn’t too busy for Mid-August (downside of teachers vacation time) and we were able to walk around freely taking pics and trying out the butterbeer. The best part of the Wizarding World of Harry Potter was the shops! They have recreated some of those amazing shops J.K. describes in the books, you can buy a wand from Ollivanders (yeah OK for a considerably high price) but you can also browse and try out the magical toys and jokes in Weasleys’ Wizard Wheezes.

You can even head down Knockturn Alley, where they have made it feel dark and dangerous in the middle of scorching hot Orlando. We had a butterbeer from a street vendor and browsed the British Pub Menu at The Leaky Cauldron. We saved the Hogwarts Express for later and headed for the Gringotts ride. The wait time was 150 minutes!!

OK I love Potter but I am not standing in Orlando heat for 2 and a half hours. To get to Diagon Alley, you walk through a brick wall; reminiscent of that scene in the first movie where Hagrid taps his wand on bricks for them to open. Outside of the Alley is Kings Cross Station and The Knight Bus from the third book and film; Prisoner of Azkaban. There is also the home of Sirius Black with his house elf peering through the window at passers by. 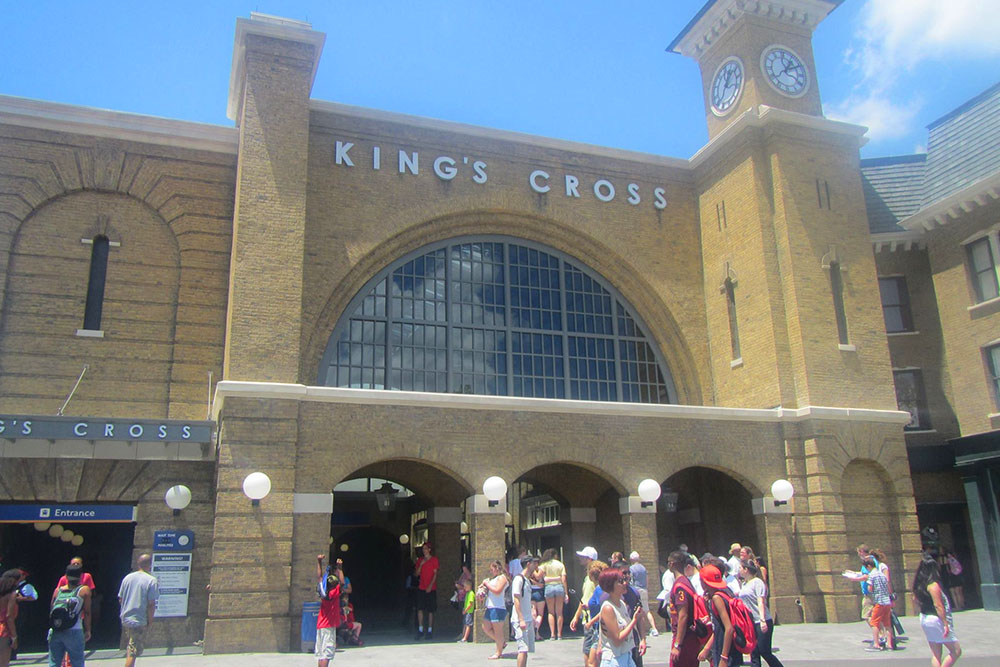 Next we wandered through the World expo section, spending some time on The Simpsons ride and the Kang & Kodos’ Twirl ’n’ Hurl ride. The Simpson ride itself is amazing, you sit in a cart and the 3D screen and moving chairs whizz you through the Simpson land – utterly amazing and you do forget you are just sitting in a chair. No trip to Springfield is complete without a trip to Moe’s – Calum tried a Duff beer (what we think is secretly Heineken) and I went all out with a Flaming Moe.

It was around lunchtime by this point and we had already planned for a late lunch (will explain in a minute), so we carried on and went on the E.T Adventure ride another ride that hurls you through darkness over the city skyline below. 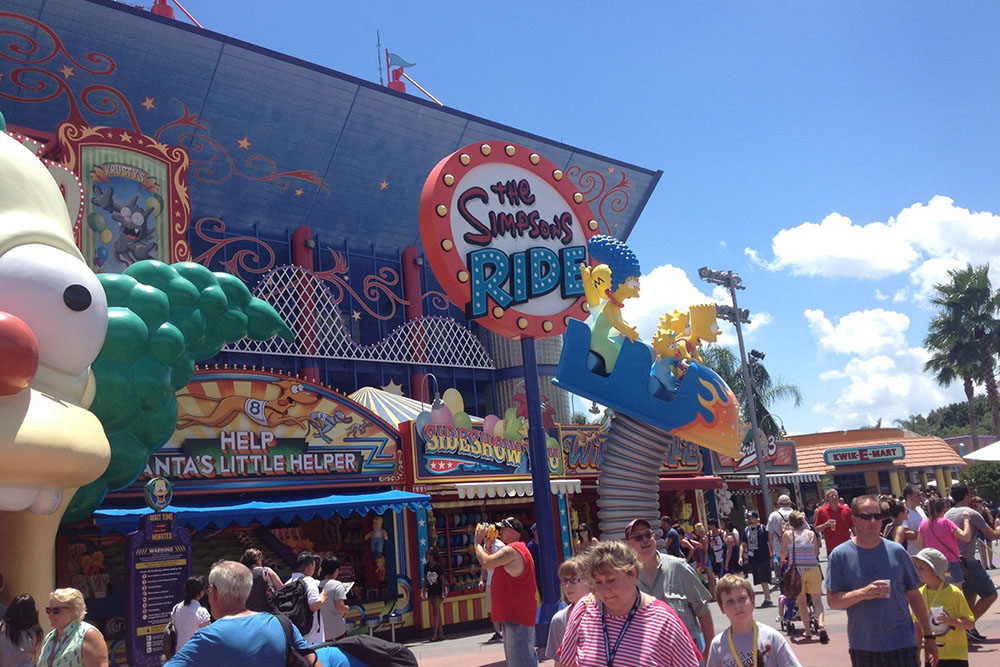 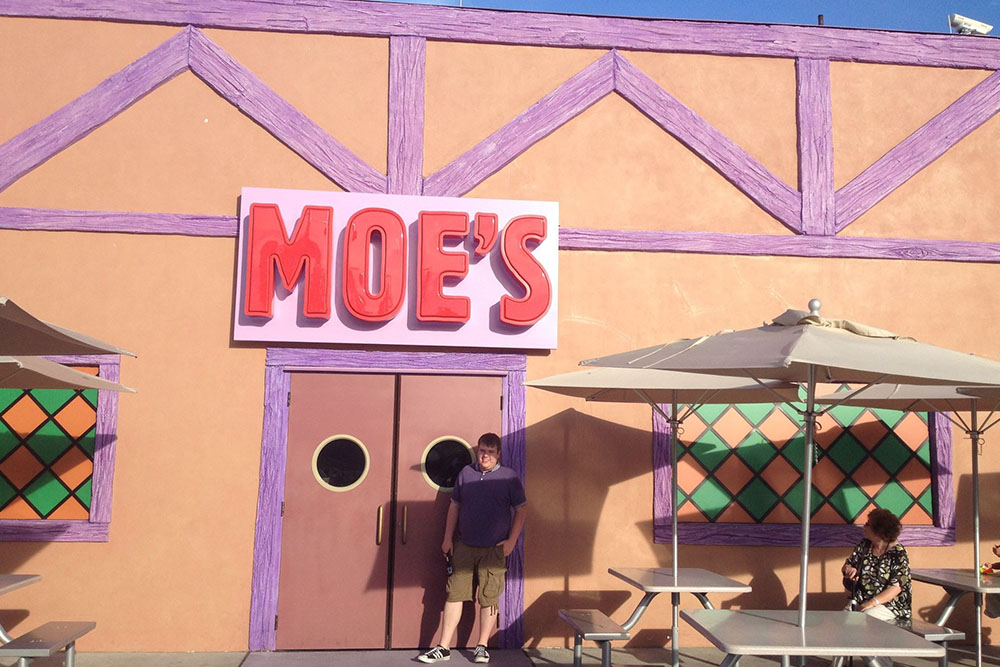 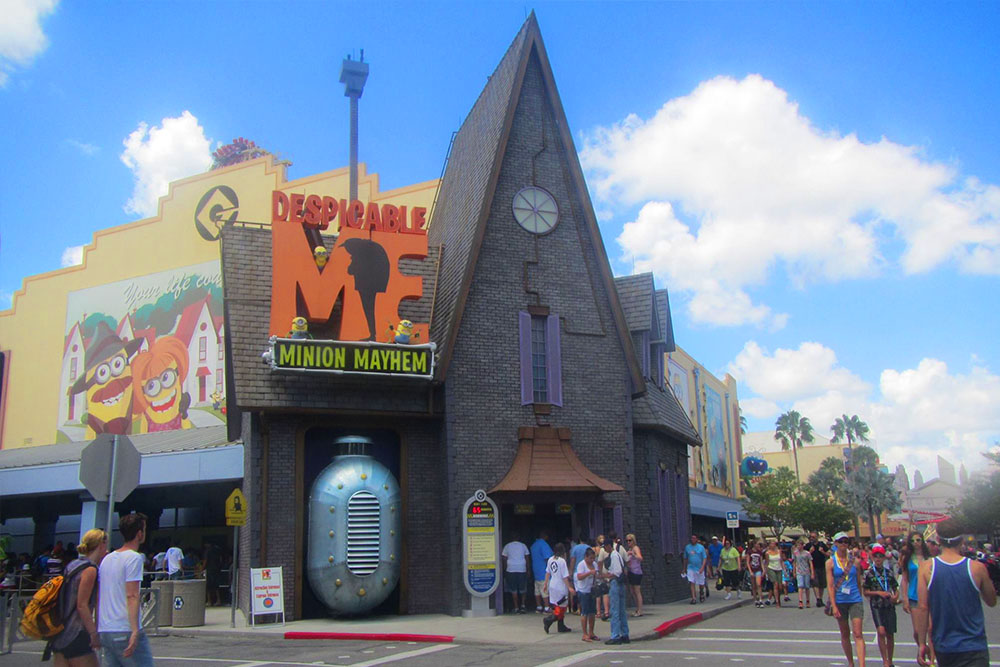 Next was the Production Central area with the popular Despicable Me Minion Mayhem ride, which we did wait (45 minutes!) for. I know I am whinging about waiting for rides and I will stop now but I just think wait times are crazy and I know it is just because they are popular and it’s not like theme parks are empty because of them but still! (comment below if you agree) Anyways, the rides at Universal rides are great for people like Calum and I who hate dangling off metal carts. The Minion ride was another 3D ride with a moving seat following a screen. 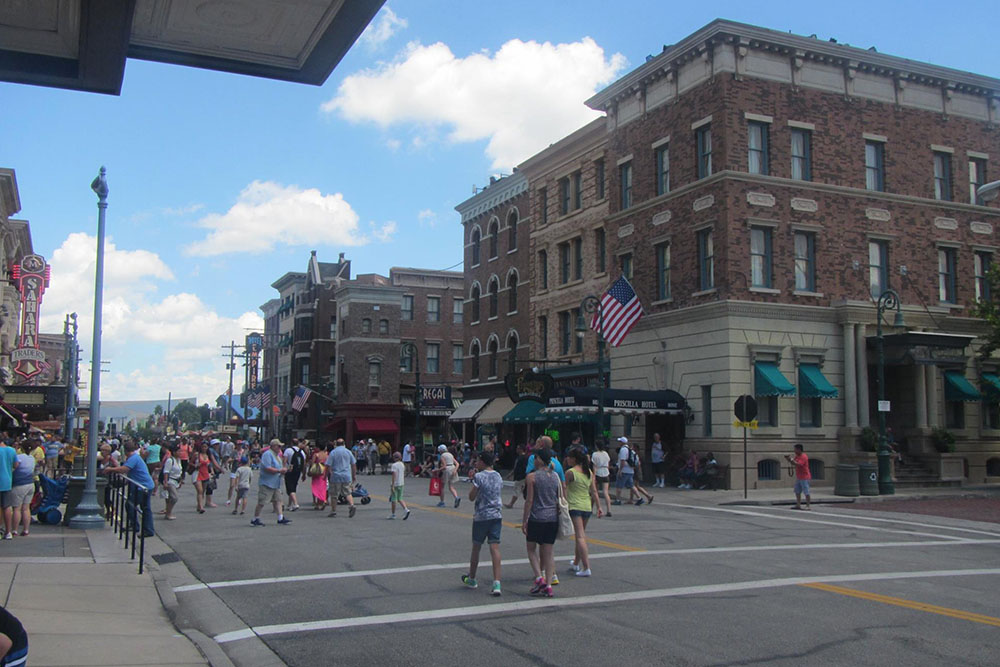 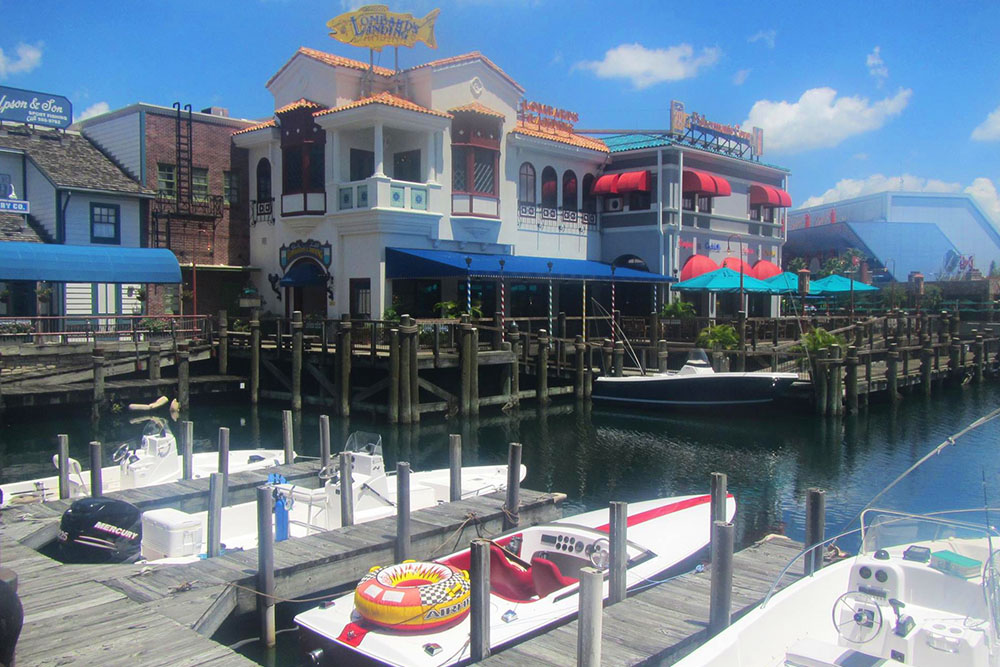 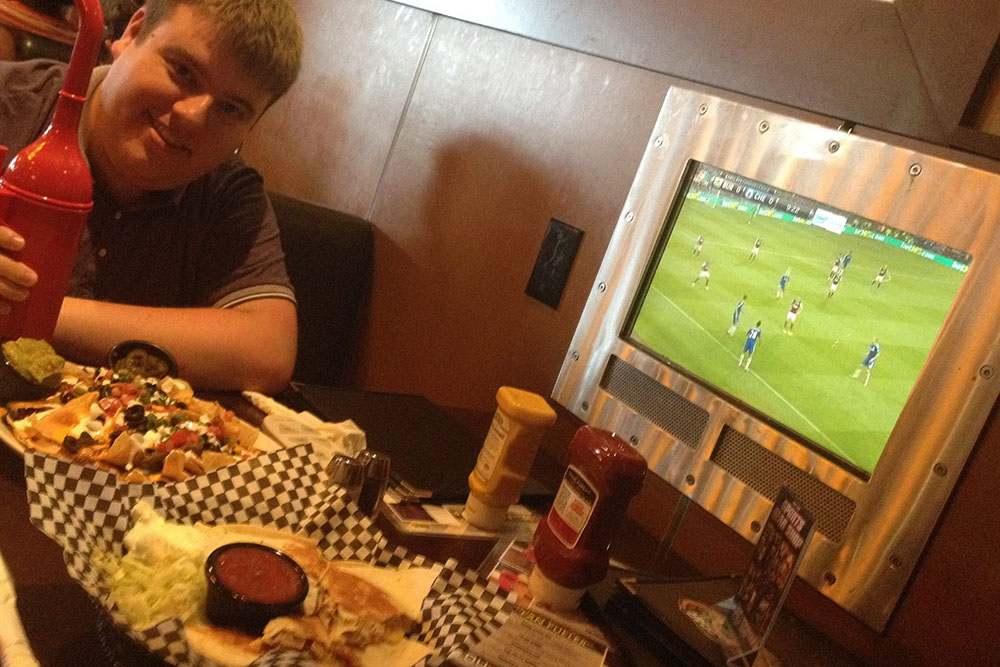 We had walked through the New York and San Francisco sections before getting to Diagon Alley so instead spent some time watching the Character Parade before heading out to Universal CityWalk. We only had a few days in Orlando and only one day at Universal so we had planned our day wisely. It was now around 2.30pm so we headed to Nascar Sports and Grill (now replaced with NBC Sports Grill and Brew), ordered some nachos and turned the personal TV (one in each booth) to the Chelsea Game.

Yes… that is why we had planned a later lunch, so that Calum wouldn’t miss a Chelsea Game even if he is travelling around America (feel my sarcastic tone). We spent just under two hours here and managed to drink through quite a large amount of beer. As 4.30pm rolled around, we headed to the Island of Adventures. 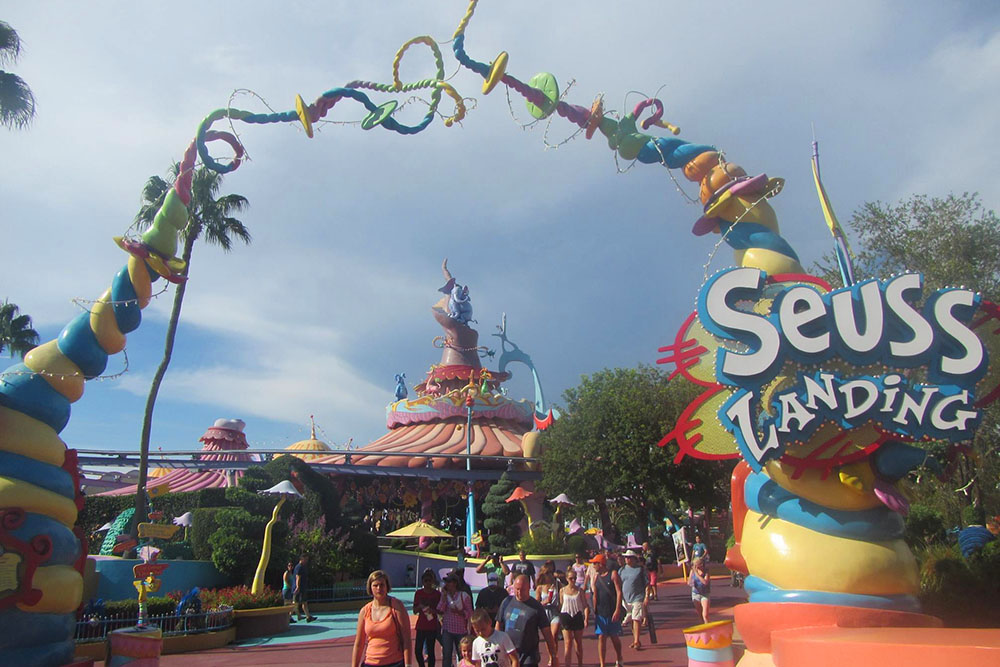 Island of Adventures welcomed us with a crazy, upside-down Seuss Land. I have to admit, we did ride a very child friendly ride in Seuss land purely to get out of the heat and enjoy the very cold air conditioning of the building. This is the same reason we entered many shops whilst walking through each land.

We swiftly walked through the Lost Continent area and immersed ourselves in Hogsmeade! (Did I mention I liked Harry Potter?) Hogsmeade is full of even more shops and a pretty awesome Honeydukes; a legendary sweetshop in the magical world of which many-a-dollar was spent.

We waited in line (as it was now like 5pm, the queues were a little quieter but not by much) and took our seats on the Harry Potter and the Forbidden Journey. The walk to the seats is just as exciting as the ride itself, you walk through Hogwarts whilst listening to the movie soundtrack that makes you all tingly… OK it may make you tingly if you are a uber cool person like I myself am. Calum rolled his eyes and complained that the length of the walk we had to take to get to the ride made the ride “so not worth it”. This time the ride is moving along whilst the chair swings around and you follow Harry on his broomstick on a big screen. 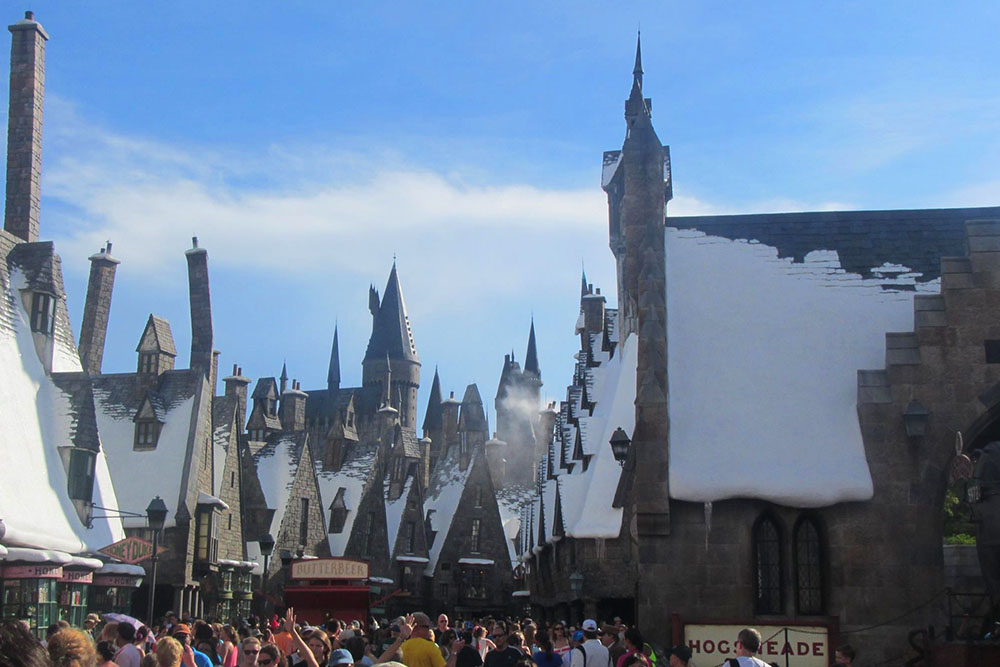 Next we headed around to Jurassic Park, riding the River Adventure ride – not such a good idea after a few too many beers. We swiftly moved through the Toon Lagoon area where a lot of the rides weren’t running for some reason, and then headed to the Marvel SuperHero Island. After a little exploring around here and a quick toilet stop, we decided to head back around the park, back to Hogwarts so we could catch the Hogwarts Express. We had to wait for just over an hour as our visit to the park was around the time that the Express had just opened. If you are a Potter fan then make sure you find time during your next visit to get this train across, it is a must!

Once back in Diagon Alley, we wandered around a little more, got ourselves an ice scream then headed back through the park. We did manage to jump on The Simpsons ride one more time before briskly walking back to the entrance for our resort shuttle home. We spent 11 hours in the Universal area and were knackered but it can be done!

If you love rides and will want to ride every single thing then 2 days will be needed per back (especially when visiting during the summer or other peak seasons). We like some rides but enjoy wandering around the themed areas and take our time to explore so we were able to go to both parks and ride a handful of rides. On our next trip to Orlando, we will be spending some more time in these parks as they were by far our favourite! Until next time.

Have you been to Universal and loved a particular ride/restaurant/bar/show/parade??? Share your experiences below 🙂 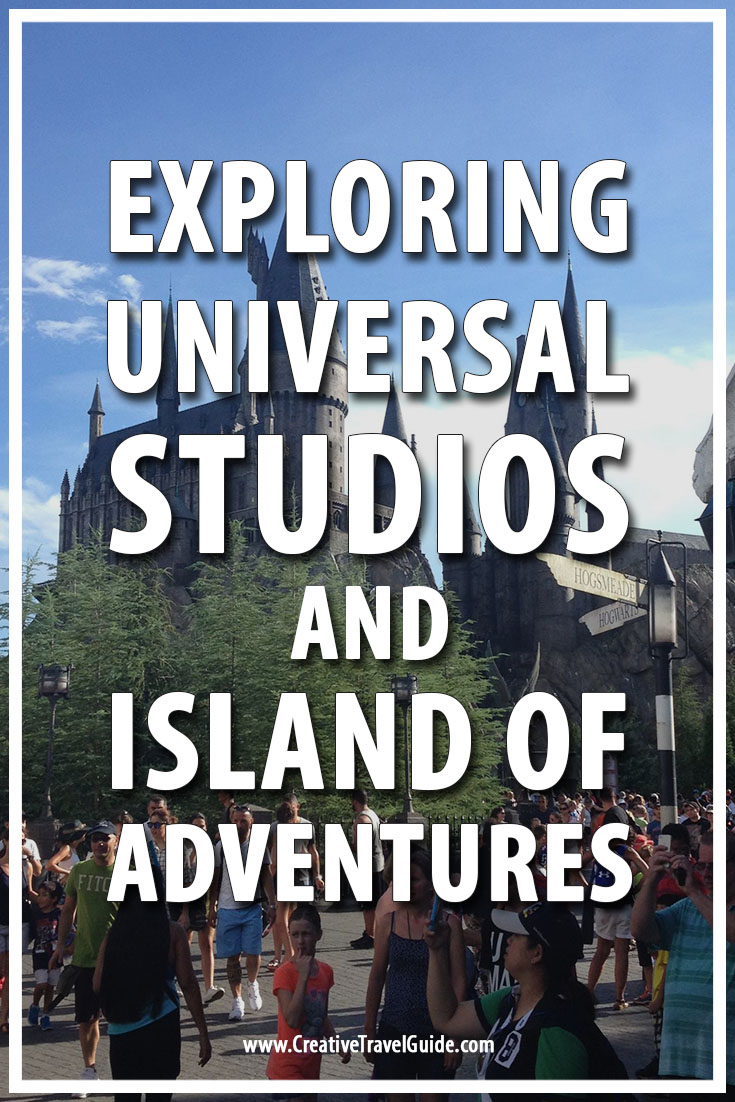 The Great Hall is the first set you walk onto, made with stone floors and decorated with Christmas trees and decorations during our visit. The costumes of the Hogwarts’ teachers are lined up across the front and props are displayed on the tables. The guide talks you through the creation of the hall and refers to some of the famous scenes based in the hall. You have around 10 minutes in the Great Hall before you are moved on for the next group to enter.

The theme parks of Orlando can be hot and cruel, here are some tips on how to survive the parks whilst making the most out of your visit!