Melissa from High Heels and a Backpack, shares her story of quitting her job, teaching for a year in Korea then becoming a full-time freelance blogger.

Tell us a bit about yourself and your work abroad?

Up until two years ago, I worked in a very corporate job in strategic procurement. My job basically entailed assessing the suppliers which our company was using to buy materials, and then finding cheaper factories and countries that would do the production for us at a fraction of the cost.

I felt immoral doing this work, especially since what I was doing was causing small businesses to lose a lot of money or have to cut their number of workers. I took what I intended to be just a year out, teaching English in Korea and kept a blog as a bit of a hobby.

Various publications and PR companies started reaching out to me through my blog and after a year of simultaneously writing and teaching, I decided to take the leap into making freelance writing/blogging my main venture.

Why did you decide to teach in Korea?

I had travelled to Korea twice before while travelling through Asia and completely fell in love with the country, its people, and it’s enticing culture. I decided that I wanted to spend a bit more time there and that teaching English would be the perfect opportunity to do so since there was so much demand for English Teachers. I felt that teaching would be far more rewarding than my corporate job and I wanted to do something that would help people. How did you apply for a job teaching in Korea?

There are two routes that you can follow for teaching a job in Korea – either searching for a government funded public school via a program like EPIK, or searching for a role at a private school independently. I decided to choose the second option since it gave me more flexibility about location. I used Dave’s ESL Café job boards and “teaching in Korea” Facebook Groups to reach out to agencies and find a position. After several Skype interviews, I chose a role that sounded like a good fit.

What were some of the perks about living in South Korea?

A Teacher’s salary is good and the cost of living is relatively cheap, especially since your employer covers the cost of your apartment so when payday comes around, you have very few outgoings to pay out. There is so much to see and do in Korea – fabulous temples, traditional towns, and frequent festivals, so my schedule was always jam packed. The country is relatively small and getting around is cheap. What were some of the challenges about living in South Korea?

South Koreans are extremely preoccupied with physical appearances. Seoul is known as being the plastic surgery capital of the world and living in the city, you are constantly surrounded by plastic surgery ads on subways and billboards and a pressure to look a certain way. One in five women in Korea will go under the knife and surgery does not have the same stigma attached to it as in the West. It’s not uncommon for people to approach you and start talking about perceived flaws that you have so for example, I have some acne scarring from when I was a teenager that never really bothered me but in Korea, people were constantly approaching me to suggest ways for me to fix it (!) after a while of living around this, and people that would starve themselves or fixate on their appearances constantly, it started to make me feel a bit crazy!

The school that I was teaching at also turned out to be corrupt in many ways – they were not paying foreign teachers their pensions or providing health insurance (both illegal in Korea) and they treated their staff poorly so although I absolutely adored my students, I hated the school’s management and when I eventually left there it felt like I was getting out of jail!

On a less deep level, fruit is super expensive in Korea. I’m talking $10 for a punnet of cherries (what?!?) so although the country is generally an affordable place to live, your food bill can be high if you want to eat a healthy, balanced diet.

So now you are a digital nomad working Italy, how are you finding living in Italy?

My Dad’s side of the family are actually from Sorrento, close to Naples so I spent a lot of time here when I was younger. I rent a small house by the sea in Bacoli, a beach town just outside of Naples. It’s cheap and the people here are all incredibly friendly and have made so much effort to help me settle in to the country.

Southern Italy is a lot less organized than the North so it was a bit of a shock becoming accustomed to the way that they handle things, especially after living in super high tech Seoul! For example, the buses run to a schedule but the schedule is considered more of a “guideline” and I have actually never seen a bus run on time! Sometimes shops and businesses can be randomly closed because the owner is running late or wants to take a day off. How hard was it to build a blog that you can financially rely on?

I feel like my blog took longer to take off than it probably could have if I had been more knowledgeable about the industry to begin with, and if I had more confidence in my blog from the start. For the first year I was posting infrequently and sporadically, not promoting my posts on social media, and was completely clueless about SEO.

Once I started looking at my blog as a business, and a writing portfolio, I saw a drastic change. I’m still learning, but I see good traffic now, make an amount each month through passive income and this year I started working with tour companies and tourism boards.

What do you love about being a full time freelance blogger?

I love the freedom of being location independent. I am based in Naples, but over the past few months I’ve travelled around Eastern Europe and the Middle East and I just carry my laptop along with me and work as I go. I feel far more inspired to write and work hard when I am sitting on a balcony in Italy overlooking the sea, or a café in Budapest than I ever did when I was cramped in a noisy, open plan office back in the UK. What are the challenges to being a full time blogger?

Being a blogger is an awful lot of work. I’m trying to reign myself in a bit because lately I’ve been working 7 days a week and I have to remind myself that I should actually leave my apartment, socialize and not live like a mole person! Particularly in the beginning, it feels like a lot of work with little return but with time, work, and persistence, things start to pay off.

Another huge challenge is dealing with other people’s perceptions of bloggers. When I left my corporate job, people acted like I was having a quarter life crisis and whenever I visit home or catch up with certain people, they start questioning when I will be moving back and getting a “proper” job which is quite annoying. Similarly, you get people that see that you are getting “free” stuff and “free” trips and then decide that they too want to write a blog (since it must be as easy as writing one post and then being offered press trips, right?).

Are you able to save much money with your online work?

Technically yes I would be able to if I travelled less and based myself in one place. If I just stayed in Italy and blogged from here, I would be able to save quite a bit, however there is just so much travelling I want to do, so all of my money goes back into investing in my future travels and my blog.

For example, I just bought a Go Pro 5 and a drone which were both not cheap and not exactly essentials, but I’ll be working with a tourism board at the end of the year and I really want to up my photography game and start dabbling in video too. The trips I’m planning are becoming more adventurous so I have to pay out on equipment, hiking gear and visas.

What are some of your best travel moments?

It’s really difficult to choose! I’ve been to Japan several times and travelled the entire country by Shinkansen. I really want to go back again next year, but I have to remind myself that there are lots of new countries to explore which I would love just as much!

This year I also finally visited Jordan. I had dreamt about visiting Petra for years but I didn’t really know an awful lot about the rest of the country before visiting. When I arrived, I completely fell in love with the entire country and the Jordanian people are so friendly! What advise would you give to others who want to work abroad?

I know that a lot of people are often worried about leaving their day job and taking a leap out into the unknown, however the skills that you have gained at home will never go away, and an international experience will only add more depth to your resume.

I would recommend that you do all of your background research on your employer fully and go through your contract with a fine toothcomb, especially if you are teaching in Asia so that you don’t end up having an experience like I did! It’s always worth saving as much money as you can before you go so that it doesn’t work out; you have enough to move onto your plan B.

What advise would you give to others who want to become full time bloggers?

People will tell you that travel blogging is a saturated market but there is always room for great content. You don’t have to be a world famous top travel blogger to make a good and sustainable income that allows you to have the lifestyle that you desire. A blog with decent traffic can act as your portfolio to help you score other writing or content marketing gigs. You can also monetize this traffic by selling advertising space, setting up affiliate links, and working with relevant brands as a sponsor.

You will no doubt encounter people along the way who think that you have an unrealistic dream which is why it is important that you have confidence in yourself and your ideas. 5 THINGS TO DO IN HANOI, VIETNAM

7 THINGS TO DO IN XI'AN, CHINA 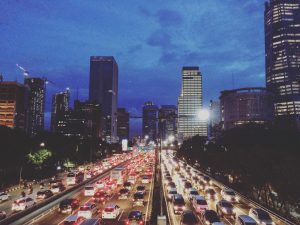